It was the final move from a dignified, proud, yet realistic man. It was clear to all that Trott would not be playing for England again after his torturous Caribbean tour, but it feels right that he should be able to, on the face of it, end on his own terms.

Trott’s recent struggles are well documented, and as far as I’m concerned they have only helped to emphasis how magnificent he was during the preceding years. But rather than focus on Trott’s recent past, I decided to cast my mind back to my three favourite Trott innings.

The fact that there are many to choose from is a reminder of his class at Test level. A man who came to Test cricket relatively late, Trott excelled for his entire career, until last winter’s Ashes tour. His idiosyncratic approach, and disciplined mind-set may have contributed to his downfall eventually, but for years they were the bedrock of his game, and England were a stronger side for it.

Making your Test debut is a daunting task, I would imagine… Let alone making your infant strides in the biggest cricket series of them all, let alone it being in the deciding test of topsy-turvy series. Trott had already made his mark with a composed 41 in the first innings to help England to a relatively competitive 332. But it was the second innings where he would excel. At one point marshalling the side from 39/3 to set Australia an improbable 546 to win. This was the innings that introduced the cricketing masses to the scratching shuffling approach that was Trott’s. His 119 included many, soon to become customary, leg-side shovels. And his evident delight in reaching a debut century was clear to see, the fans there and then accepted him.

Maybe a slightly odd choice considering England didn’t win the match. But Trott’s second innings ton was a master-class in how to play on slow, turning sub-continental wickets. Facing a run chase of 340 in sweltering conditions, against two spin bowlers who had had England in knots for the entire match, Trott calmly complied his century while all around him floundered. He made 112 out of England’s 264, where the next best score was 41. Despite never looking technically solid against the spin twins of Herath and Randiv, he found a way to make his technique work during his prolonged spell of crease occupation. It was that ability to make the most of the situation and his skill, which made Trott such a valuable asset. 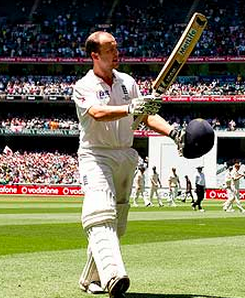 I may be slightly biased with this one, as I was lucky enough to see it live. In front of a packed house at the MCG, with the Aussie crowd baying for blood in revenge for the first day’s embarrassment of being all out for 98, Trott went into his bubble and produced a masterpiece. From what I can remember, the innings was flawless. He never even looked like giving the Australians a chance, and while it may have been Pietersen’s spat with Ponting that took the headlines, Trott’s sublime 168* gave England the impetus to push for an innings victory. The way in which he handled the Aussie quicks, which included Mitchell Johnson, was nothing short of greatness. His ability to drive, pull, and even hook the ball makes this my ultimate Trott innings.