In what has been a compelling and unpredictable Premier League season thus far, two young mangers have emerged from the scrap for a top four finish with immense credit. Both Brendan Rodgers at Liverpool and Roberto Martinez at Everton have earned the respect of their halves of Merseyside. Despite their differing positions in the table currently, second and seventh respectively, both managers have gained plaudits throughout the season for the way they have lived up to heavy expectations and the burden of following much loved managers.

If we look at Rodgers first, the 41-year-old from Northern Ireland had huge shoes to fill when he took over as manager of Liverpool from Kenny Dalgleish at the start of last season and had to deal with a lot of pressure from the local fans. Rodgers was snapped up from Swansea City during the summer of 2012 after guiding the South Wales side to an impressive 11th place finish in their first season in the Premier League. However Rodgers endured a tough start to his tenure with the reds, after failing to win any of his first five league games in charge. This was coupled with an ill-fated documentary (Being: Liverpool), which was basically produced to satisfy US fans by seeing their heroes in their home country. Not an auspicious start by Rodgers by any stretch.

Fortunes varied throughout last season and the Liverpool faithful were becoming tired of hearing Rodgers excuses and pleas for more time. This has been a particular sticking point during Rodgers’ time at the helm of one of England’s most decorated clubs. Rodgers has always spoken about a legacy and a long term plan; this is usually based over a number of years, and in a modern game where results are expected instantaneously, it can be hard to gain the trust of the supporters.

A seventh place finish in the Premier League was a fair reflection on where Liverpool stood last year, an accomplished side but a little short on depth and quality to challenge the top four. However, one bright spot from last campaign was the signing of Daniel Sturridge, who we have seen to be devastating in front of goal this season. Indeed, the signing of Sturridge can be seen as the catalyst for Liverpool’s current title challenge and the rise in Rodgers’ stock. 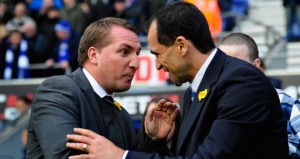 It is important, when talking about Rodgers, to mention his approach to football and his tactical philosophy, or at least that what everybody tells us. Rodgers was appointed at Liverpool promising not only success and long term planning but to also to bring a more free-flowing, attacking philosophy to Anfield. The signs could begin to be seen during the second half of last season, but this season has been a revelation.

Much has been made of the potent strike force of the new SAS; Sturridge and Suarez have scored an almost unheard of 42 goals between them. But, it is easy to argue that any manager could just send out the two talented strikers and reap the rewards. Where I believe Rodgers has really shown his tactical awareness is in the new look Liverpool midfield. To begin with, he has encouraged Steven Gerrard to sit in a more defensive position and run the show from much deeper. Gerrard is no longer the marauding, buccaneering attacking midfielder of his youth, he is much better employed these days in an area where he can shield the defence and quickly launch attacks with pinpoint accurate passes. As well as employing Gerrard in this new role, Rodgers has obviously gained the trust and respect of his captain, Gerrard seems to be willing to work hard in his new position and has publicly expressed admiration for Rodgers and his style of play.

Another player who Rodgers has helped to realise his full potential is Jordan Henderson. Initially discarded by Rodgers at the start of last season and basically transfer listed, Henderson’s transformation this season has been remarkable. A man who Sir Alex Ferguson famously ridiculed for his gait has become a major cog in Liverpool’s title challenge. I can see similarities in the role he has performed this season and the role that Rodgers entrusted to Leon Britton during his stint at Swansea. Henderson has been supreme in providing the simple passes that have unpicked many a Premier League defence and laid the ball on a plate for Sturridge and Suarez to slot home from close range. 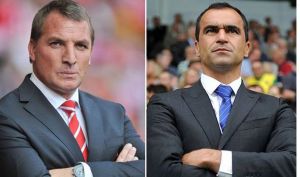 Rodgers has recently revealed that Harry Redknapp had asked him to be his assistant if he was offered the England job, but if he can continue to revive Liverpool and, whisper it quietly, capture that elusive Premier League crown, there is no reason that if the will is there, Rodgers couldn’t tackle the main job on his own.

Turning my attention to the other side of Merseyside, it is also clear to see the galvanising effect that Roberto Martinez has had on his new side. It was a general opinion that his predecessor, David Moyes, had taken Everton as far as they could go and whoever was to take over from him was taking on a poised chalice. However, Martinez has, if anything, shed light on Everton’s limitations under Moyes stewardship and shown that the club can progress with the Spaniard in charge.

Everton have enjoyed a successful season so far and have impressed many with their attacking play and willingness to commit bodies when going forward. Martinez has brought his style of football that gained him so many admirers at Wigan to Goodison Park and the Toffee’s fans have reaped the rewards with the exciting football on show. I would argue however that Martinez’s presence has been felt greatest off the pitch at Everton. His signings during the summer have turned out to be top notch and have allowed Everton to realistically challenge for the top four once again.

Gerard Deulofeu has impressed since joining on loan from Everton and Martinez has mostly employed the 20-year-old Spanish youth international as an impact substitute. The signing of James McCarthy from Martinez’s former club Wigan and experienced midfielder Gareth Barry have also proved to be masterstrokes from Martinez. McCarthy was impressive during Wigan’s relegation season and has earned his chance with a bigger club and for the most part he has not looked out of place and a large amount of credit must be given to Martinez for his development of the player. Barry’s signing has also benefitted the Toffees, his experience and calmness under pressure has allowed some of their more creative players the chance to express themselves.

Martinez has also proved astute in deciding which players should leave Goodison, Marouane Fellaini has struggled since his high profile move to Manchester United and Barry has more than filled the void left by the Belgian. Man United also came knocking for Leighton Baines, however on this occasion Martinez stood his ground and retained the service of Baines; who signed a new deal to boot.  Finally, Martinez managed to negotiate the season long loan deal of Romelu Lukaku from Chelsea. The front man, formerly loaned to West Brom, has proved to be the physical presence in attack that Moyes’ Everton were often lacking.

Both Martinez and Rodgers have prided themselves on their approach to the game and the style with which their teams play. However, it seems to me that in their most recent jobs they have taken slightly differing paths. Rodgers has utilised the talents he has at his disposal to transfer his high tempo game onto his current Liverpool team, where Martinez has been more astute in the transfer market to bring about his desired style of football. Perhaps this is due to the varying financial constraints of the two clubs?

As far as I can see, these two young managers have put themselves into great positions through not only their attacking style of play but also the way in which they have been able to gain the respect of fans after following much loved mangers. These two men who both cut their managerial teeth at Swansea, have followed similar career paths thus far and I can them battling it out for the Premier League title with whichever club they choose in years to come. That’s of course assuming Europe doesn’t come calling, and in the case of Martinez I wouldn’t be at all surprised to see him take charge of Real Madrid or Barcelona in the near future.